Preview of the Gobi March Competitors

The race takes competitors across vast grasslands, sand dunes, great rock valleys, wide open steppes and old forests. They will sleep in traditional Gers (yurts), experience the local Naadam culture, run past nomadic farmers with their animals and pass through the UNESCO Heritage Orkhon Valley as well many stupas and temples.

There is going to be some battles at the front of the field with a lot of strong athletes. This made more exciting as there is no stand out favourite among either the men or women.

• Jisub Kim from South Korea returns after six years when finished 3rd at the Gobi March in China back in 2013. Since then he has taken up running full time and the 31-year-old is sponsored by The North Face.

• Greg Roadley from New Zealand returning to his 2nd RacingThePlanet Ultra after finishing 5th at the Atacama Crossing last year.

• Roskovics Nyikolaj from Hungary who was also 5th on his previous RacingThePlanet attempt in the Namib Race last year.

• Bdjargal Byambaa is one of two competitors from Mongolia who will be representing their home country. Bdjargal currently holds the Mongolian record for a 24 hour-race (182km / 113 miles) and last year he won a 6-day 789 km / 489 miles race in the United States. 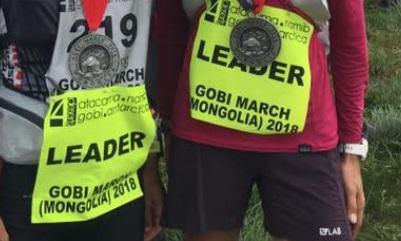 Others to watch for include:

With such an open field there are many others who could be in the Top 10.

Jamie Harrison from Canada who finished just inside the Top 10 at the Atacama Crossing 2018.

Pierre Delalau from France is joining his first RacingThePlanet / 4 Deserts Ultra but has completed many other stage races, finishing 4th in one.

• Amanda de Kock from South Africa will join the 4 Deserts Club when she completes the Gobi March – she has 5th, 2nd in the Sahara Race (Jordan) 2014 and The Last Desert (Antarctica) in 2016.  Could the Gobi March be her chance for the 1st place?!

• Anim Swart from Canada is returning just two months after her last trip to the desert in Namibia where she finished as the 5th woman.

• Fiona Oakes from the United Kingdom has 4 world records to her name and vast experience running marathons and ultramarathons. She was the feature of the film Running for Good as a vegan runner who has an animal sanctuary with more than 400 rescued animals. She has yet to show her full form at a RacingThePlanet / 4 Deserts Ultra, but perhaps this is her time.

We also have a feeling that Rachel Roadley from New Zealand may be one to watch as she joins the race after watching her husband finish in the Top 5 previously.

Not everyone is in with a chance of a top spot, but that doesn’t make them any less interesting.

There are thirty-four countries represented including Luxembourg, Brunei, Andorra, Guatemala, Honduras, Russia and Hungary. The most represented countries are:

The oldest competitor Renzo Moltrasio from Italy is an impressive 71 years old. He has completed ten RacingThePlanet Ultras (so far) - most recently RacingThePlanet: New Zealand 2019. Rest assured that Renzo will not be at the back of the pack.

The youngest competitor is 19-year-old Lok Lam Lee from Hong Kong. Lok Lam is part of Team Esquel. He is a student at Christian Zheng Sheng College.

There are some great adventurers among the competitors, in particular many mountaineers.

Gunaseelan Varun from India has climbed more than sixty-five peaks across six continents.

Martin Molsatar from Norway has completed a marathon on each of the 7 continents in just 7 days.

Tanninen, Hannamiina from Finland is a World Champion (speed?) skier from 2006.

We are very happy to welcome back two 4 Deserts Club members: Jisung (Jesse) Yoo from South Korea and Cynthia Fish from Canada.

• Jesse Yoo has not only completed all 4 Deserts but the Gobi March 2019 is his 22nd RacingThePlanet / 4 Deserts Ultra. He is the only person to qualify for and complete The Last Desert (Antarctica) twice.

• Cynthia Fish is one of only eight people in the world (and one of just two women) to complete the 4 Deserts Grand Slam Plus. She is fondly known by us as “Gobi Fish” as she is joining the Gobi March for her 5th consecutive year and has been official finisher every time.

Simon Melanson from Canada, Amanda de Kock from South Africa and Qing (Eva) Zhou from China will join the 4 Deserts Club when they cross the final finish line of the Gobi March this year.

Just one team will join the Gobi March 2019. Team Esquel from Hong Kong is a partnership between the global textile company Esquel and Christian Zheng Sheng College (a school that provides vocational education for youth that are overcoming alcohol and drug addiction). The team members are one senior manager from Esquel and two students in their 20’s from the school. Among other skills, the school teaches students media and video production. A team from the school will be filming the race.