Think You Could Not Take on 250km - Read Namib Race 2018 Finisher About How You Can! 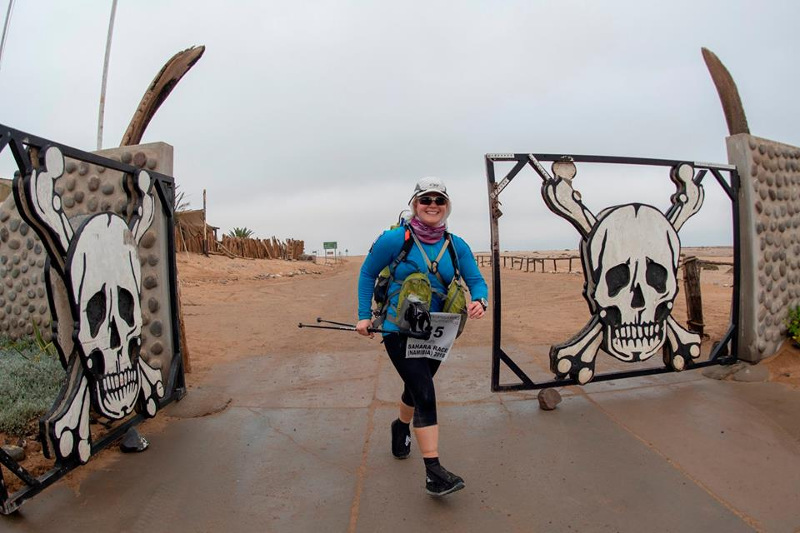 Think you couldn’t run 250km through the desert carrying all your own food and clothes for seven days?

Ruth Upsdell, trainee rural hospital and urgent care doctor at Central Otago’s Dunstan Hospital, argues you could. The 33-year-old has just completed her second such race across the Namib Desert – her first was in 2015 – and says you don’t need to be an athlete to do it. And lest you prevaricate by saying you’re not keen on travel...next year the bonus fifth “roving race” from the 4 Deserts series, is being held in New Zealand.

The 4 Deserts comprises four 250km self-supported endurance foot races held every year in Namibia, Mongolia, Chile, and Antarctica, plus one extra location each year. People can compete in as many as they like.

The race takes place in six stages over seven days with four stages around marathon length (42km), one 70–90km section and a final short stage of 10–20km. Dr Upsdell completed the 84km-long stage in 16.5 hours, running from 8am to around midnight, but reports some runners were still coming in at 12pm the next day.

Many of her friends thought she was crazy and didn’t expect her to finish her first race, but the support from doctors and nurses at Dunstan Hospital has been amazing, she says. They followed her progress online the whole way through. The varying terrains of the Namibian race almost defy description. On “beach day”, competitors run in sand for 42km along the Skeleton Coast with wind and fog rolling in from the “fierce” Atlantic sea. Other parts of the race are quite rocky and gravelly, dotted with gemstones, minerals and lots of quartz. “You get a sense it’s an ancient, almost volcanic landscape.”

Another day, she ran along the undulating ridgeline of sand dunes, famous for their orange-red hue caused by a high iron content. “They go on as far as the eye can see. The casting of light and shadow over the landscape is insanely beautiful.”

Home to desert lions and other creatures, this area of Namibia is protected and not open to the public, so running along it is even more of a privilege. The sound of jackals laughing in the distance accompanied their sleep at night. There are checkpoints every 10–15km with water available. Apart from organisers putting your tent up every night and providing water, all supplies have to be carried on your back for the race – sleeping bag, food, medical supplies, clothes, toilet paper and sunscreen...

Runners aim for a baggage start weight of “the golden 6kg”, but usually only the professional runners manage this. Dr Upsdell started at 9.8kg and she met one man with a whopping 20kg pack. To keep the weight down, most of her food was freeze dried, supplemented with beef jerky, chips, salt tablets, sports powders, emergency jellybeans, and muesli bars.

Everyone on the race goes through their mental and physical ups and downs, she says. Her plantar fasciitis was so bad on the first day, she wasn’t sure she would finish. It’s a game of trying to manage yourself, keeping the balance of salt and hydration right, and pushing through nausea and self-doubt, she says. But overcoming these obstacles and coming out on the other side is an incredible feeling.

She would like to be a race volunteer, as her husband was this year, and learn more about musculoskeletal medicine in an endurance situation in the future. Dr Upsdell brushes aside the difficulties but is loquacious in her praise. From pushing yourself to physical and mental limits, the camaraderie, meeting people challenging themselves from all around the world, the incredible mental and physical space you enter trying to complete one of these, it’s such an amazing experience.

“I feel super humbled and grateful for having the chance to do this kind of event,” she says.

The benefits and rewards for your body and mind are also huge, including weight control and achieving a better work–life balance. “You have so much energy when you build up your fitness to do something like this. It’s motivation to get off the couch, you feel healthier within yourself.”

Which brings her back to encouraging others to do it. “I would totally recommend it to anyone. Don’t let the sound of 250km intimidate you – you just have to break it down into small chunks...you only have to run to the next flag. I’m not a running elite by any stretch of the imagination, I’m just an everyday person who wanted to achieve something for themselves and set out to have an amazing experience and challenge myself. Six years ago I couldn’t even run around the block. If I can do it, anyone can.”

Dr Upsdell puts into perspective her intensive three-month training plan leading up to the race, averaging about 70km a week, including endurance, strength, speed and hill training, and building up to 50km runs: “If you think about it, that’s only 10km a day.”

Dr Upsdell is back at work now. After finishing the race she had a week’s holiday with her husband in Botswana, while her blisters healed, and toenails fell off. "Your body recovers, and you start feeling good quite quickly," she says.

At the end of our conversation I ask if there’s anything else she wanted to say, and she suddenly remembers one important detail. She came fourth overall in the women’s category, first in the 20–39 women’s category and 36th out of all 88 competitors.